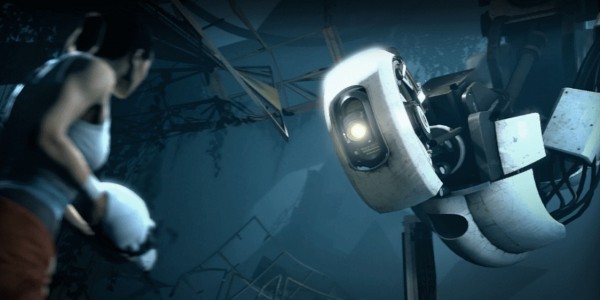 Valve's 2007 first person puzzle game Portal was a surprise hit for everyone. The game acted and felt like a first person shooter but you just didn't go around killing anyone. Instead you solved puzzles based on some simple - and some not so simple - physics problems. Introducing us to GLaDOS - one of the most maniacal robots in Science Fiction since the IG 88 assassin droid - and Chell, a "silent partner" whom the player took control of and completed a series of puzzles without any real indication as to how or why, Portal was a revolution in gaming. Portal 2 exposed Portal as the prototype it was always meant to be, however, introducing new characters and completely expanding, redesigning and reintroducing us to the story. Despite being set thousands of years after the first game it might as well have been the next day for character Chell, as she made her way through the very history of Aperture Science and you were given a history lesson nobody was likely to forget. But just what did we learn throughout the game's mysterious second act? As Chell advances deeper through the history of the company - from the profitable 50's to the bankrupt 80's - there's hardly any time travel at all. Instead we're given clues and hints to the past and forced - mostly due to the silence of our character - to figure a lot out for ourselves and consistently break down that fourth wall. This is just one of the most enjoyable reasons that you should play this game because Valve have created a way to keep you thinking about this game hours after you've completed playing it. You'll go back and attempt missions just to check hidden corners and cracks for that secret plaque - not because you have too - but because you'll want too. Of course you're also welcome to review this list and have a tiny bit of help getting you started in the right direction. Naturally, there will be spoilers!
Contributor
Wayne Madden
Contributor
Twitter
Facebook

First studied Journalism in Ireland in 2003, returning to Sunderland University on the tenth anniversary of my first studies in the subject to continue towards an MA. Interested in all sorts including WWE, Music, Film, TV and Games. Has travelled around a bit to places like California, Ontario and Mexico and plans to do more of the same soon again. Recently I've been writing pieces on my favourite topics which have included obscure theme music from nostalgic shows, Guns N' Roses and a few other surprises I'll be happy to share in time!

10 Ways Games Punish You For Not Playing Them

Crash Bandicoot 4: It's About Time - 10 Reasons To Be Excited