Remember when games used to be hard? Remember when we used to agonise over the Unity Station mission in GTA: San Andreas? All you have to do is follow the damn train, CJ - if it only it were that simple. Games of the previous generation were often brutally difficult, and even the "children's" age games were sometimes scream inducing: Jak II, anyone? It's hard to imagine today, given how far the industry has come away from that, but there was once a time when games were just too hard. Nowadays this never happens - save for some arcade and indie released designed with older sensibilities, almost ever blockbuster released is just so simple that we can finish them in an afternoon. But why is this? Are we getting too good for designers, or are designers aiming their games at a bunch of monkeys who don't play video games? We'll look at why they might be getting easier first. A lot of games have a main focus on online play, whereas PS2 era games were solo only. We, players and developers alike, all know that value that online play brings: playing with friends, seeing truly unique moments and being challenged by a human mind is the main appeal of online play. It is a certain kind of entertainment that offline games can't provide, but this also works in reverse. Multiplayer needs to be dynamic and balanced, so a scripted narrative of extremely linear levels doesn't work for play. But this in itself is another reason games might be getting too easy: balance. Balance refers to how good a pro player can be next to a first time player: in an ideally balanced game, a veteran will do the best, but a newbie will still have a fighting chance. In online play, there are no difficulties, there is just you, your gun and your eyes. In an single player "campaign" (a word only really popularised during this hardware generation), there are different difficulty levels, and changing the difficulty can be a big or easy step. In a game like Call of Duty, it simply makes enemy fire do more damage to the player, but in a game like Batman: Arkham City however, it can take away certain assists on top of the damage increase. In the past, a lot of game series didn't come with staggered difficulties, and we were just given what the designers gave you, without the option to dumb everything down, for better or worse. Some game series carry this tradition on: Grand Theft Auto, the original two PS3 Ratchet & Clank games, and the Assassin's Creed franchise impose a single difficulty level whether you like it or not. And sometimes it works well - I never found Grand Theft Auto IV too strenuous or breezy - but sometimes, however, it doesn't go quite so well - I still have not finished Ratchet and Clank (Future): Tools of Destruction, as I'm still stuck on that infernal last boss, and Assassin's Creed is always too damn easy. I can finish AC2 and AC:B without dying, and that's a worrying sign, though I do tend to die a bit more in AC3, so that's an improvement. In the words of Assassin's Creed 3 director Alex Hutchinson, "A lot of games have been ruined by easy modes. If you have a cover shooter and you switch it to easy and you dont have to use cover, you kind of broke your game. You made a game that is essentially the worst possible version of your game." The sentiment rings true: games need an easy mode to help hold down the ideas, and a hard mode to make you use all of your tools and abilities to get through. Playing a Splinter Cell game on easy allows you to just walk up and kill everything, while hard forces you to look for alternate routes, use gadgets and play a bit of the waiting game. It's like a totally different game. 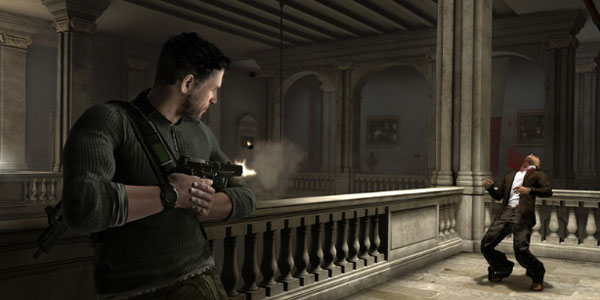 Some games offer their difficulties in smart ways: Mass Effect 3 uses group AI and several enemy types in each encounter to let the tactics of the game shine through. Even when playing on the default setting, you need to actively bring you and your squad mates abilities into the fight, you can't just macho your way through each level. Unless you're playing on narrative, the easiest difficulty, which makes Shepard nearly invincible. Other game designers aren't so smart: rightly acclaimed developer Naughty Dog moved from more younger games like Jak to more heavy shooters when the PS3 came out. As mentioned above, there are ways to make third person shooters difficult without being unfair. Naughty Dog has not mastered that art: enemies are absolute bullet sponges, and those armoured guys are not just insanely hard to kill, but completely unbalanced. I want to throw my controller across the room when they one shot me from metres away with their shotguns, despite the fact that I just put 20 rounds in their brain bubbles. It just doesn't work well.

But what if games aren't getting too easy? What if we're getting too good? I mean, in most things humans do, we get better over time? Well, that might be a factor, but not the definitive solution. The designers could simply make the game harder. And, what if games are getting too short? Well, they are. The focus on online play, which usually provides the most level playing field for moderately skilled gamers, means resources are often taken from the single player mode to improve the quality of the online. This, in turn, means the core game is shorter. While most people will take a better game over a longer one, increased length certainly doesn't hinder our impressions. If we look at "long games" our mind goes to games like Ubisoft's high budget, high selling Assassin's Creed III, and Rockstar's open world opus Grand Theft Auto IV. These games are shorter than their counterparts on the last generation of consoles (how many hundreds of hours did we spend in San Andreas?), but we most prefer GTA4 to San Andreas, because it is of superior design. Mostly. But I'm getting off track. Games are certainly getting easier. Is this for better or worse? Well, it all depends on who you ask. Easy games make us feel good when we slam through the "difficult" sections but when a hard game like Dark Souls or Rainbow Six: Vegas comes along we melt under the pressure. Maybe the increased focus on widening the market is a key factor, maybe it's the focus on online challenges and expansive content, or maybe we're just too good. Do you think games are getting too easy? Discuss below!
We need more writers about Batman: Arkham City, Call of Duty, Mass Effect 3, Grand Theft Auto IV, Dark Souls, Uncharted 3: Drake's Deception, Splinter Cell, Ratchet & Clank, Grand Theft Auto: San Andreas, Assassin's Creed III and Jak & Daxter! Get started below...
Contributor
Ryan Musker
Contributor
Twitter

I live in Australia, love to write and play games. So what better than writing about games? I love all things action and fantasy, as well as my occasional shooter. I literally cannot wait for GTAV!

10 Times Video Games Made You Betray Your Friends

8 Secret Video Game Horror Weapons That Broke All The Rules

8 Video Games You Can Break By Playing Perfectly