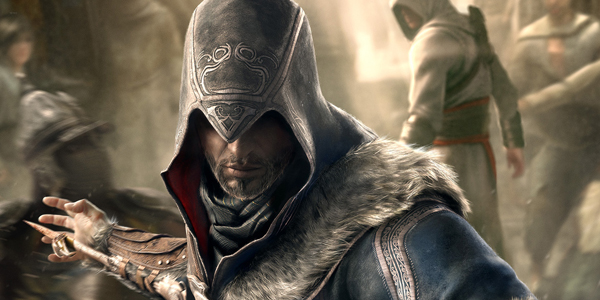 Another year, another Assassin's Creed. I wish this weren't the case. Let me explain my self. I loved the original Assassin's Creed, for all its faults, and was hugely excited about its sequel. The promise of more variety, a new character, a new period of history and a longer, richer tale had me waiting on baited breath. I was not disappointed, Assassin's Creed II delivered on everything it promised and more. The rise of Ezio Auditore Da Firenze, from birth to re-birth as an assassin was compelling, exciting and most of all a joy to play. I forgave Ubisoft for removing two chapters from the story and releasing them as DLC (even though it is basically criminal in my opinion) and even bought the budget price Game of the Year edition. I loved it. Then came Assassin's Creed: Brotherhood and my love affair with Ubisoft's franchise grew cold. I no longer looked Assassin's Creed in the eyes when we made love. I called other game's names out in bed. Ok, I'll stop. It wasn't that Brotherhood was a bad game, it really wasn't. It just felt so bloody unnecessary and a complete cash in on the huge success of ACII. Brotherhood continued the story of Ezio, directly from the end of ACII, but never added much to the story. Much like the end of the original AC, ACII ended with a lot of questions un-answered. I liked that, it made me super excited for Assassin's Creed III. But Brotherhood isn't ACIII, it is ACII-2. A sequel to a sequel. Who cares though right? The more the better? Well maybe that is true but the story in Brotherhood always felt as if it were just finding excuses to stick with Ezio rather than having genuine narrative concerns to address. What we learn is for the most part learnt through our sessions with Desmond (groan) and would have been much better suited to a true sequel. I loved Ezio but watching him grow old isn't the same as watching him grow up. I wanted a new protagonist, a new era and a new culture. I didn't want an extended expansion on ACII. So now we have Assassin's Creed: Revalations, or should I say ACII-3. The end to the supposed 'Ezio trilogy' (anyone at Ubisoft who claims they always intended to make a trilogy is a bloody liar) and a farewell to Altaïr Ibn-La'Ahad (our first protagonist) as well. Well at least we get to be Altaïr again. So has Revelations given us something new or has it just re-used existing assets once more. Of course it has, it's only been a year! The game starts out with a little catch up session followed by setting up Desmond Miles' current predicament. Which is being trapped inside an animus. The animus world is a bit like a dreamy landscape crossed with Tron. They are certainly not helping us to feel any desire to play as Desmond. However, you can skip these sequences completely (hurrah!) and if you do, you don't miss that much. You are quickly transported to Masyaf and get to watch the frankly excellent CGI trailer (you know, Ezio gets shot in the shoulder, then kicks eight shades of shit out of a ton of guys) which does a far better job of making you want to play the game. Still, as the proceedings progress I can't shake the feeling of deja vu. You get a ropey basic tutorial in Masyaf, following a ghostly Altaïr across the various hand holds, lanterns and ledges. This would be a great little intro if Altaïr wasn't always on top of you, making it very hard to see what you are doing. As the level progresses you see some very familiar sights but you are quickly whisked away to the main hub of the game; Constantinople. Being right on the Asia/Eastern Europe border, Constantinople is a diverse and interesting place and genuinely makes for a great Assassin's Creed city. It was a big relief that the game doesn't take place in Italy again but Constantinople still feels very familiar, featuring all the same architectural features we recognise as climbing points.

In terms of looks, Revalations is much like Brotherhood. It doesn't look bad, but it lacks the polish of Assassin's Creed II's presentation. There are a lot of visual glitches such as assassinating people who are floating in the mid air, obviously missed impacts and screen tearing. These aren't game breaking but considering how long the developers have been working with this engine, you expect more. Also, for some reason everyone looks different. Desmond and Ezio both have a puffy, ape-like look about them which is strange. It seems odd that they didn't use the Desmond model from Brotherhood and ACII. I am being very negative really and I should point out that Revelations does look great. The Assassin's Creed franchise has always looked great, with great levels and open world design. The combat animations and freerunning also look amazing, even a forth time around. But really, that is beside the point. Revelations is walking a well worn path and rarely strays from it at all. Visually it could be mistaken for any Assassin's Creed game. I'm sorry but it isn't good enough to just churn out more of the same, new gadgets and battle mechanics do not count as genuine evolution, just tweaks.

As you would imagine the gameplay is largely the same as the previous two Ezio led games. You can chain attacks as you did in Brotherhood but sadly, this makes fights very brief, very easy and very boring. I personally enjoyed the countering system in ACII. The variety of weapons and tactics kept battles fun and challenging. Chaining isn't hard or fun and while some of the chained moves are brutal, they lack the calm and collected butchery of the counter attacks. There are some new travelling features, most notably the hook blade. A modified (and stupid) version of the wrist blade that can be used to launch Ezio up higher or reach further as well as zipline across the many convenient (yet utterly pointless) wires. Like Brotherhood, these changes feel forced and pointless, like a child who doesn't know when to stop drawing, it has become over fiddled and messy. There are too many context specific travelling options, they take away your sense of freedom in a way because your path is being pointed out to you. A major new feature is Den Defence. All I can say about Den Defence is WTF? No, actually I can rant about this too. What were you thinking Ubisoft? Den Defence (tower defence) is a genre in its own right and has no place in a third person, open world action game. Especially a watered down version that is clunky, un-intuitive and totally boring. I would facepalm if I didn't have such a mind splitting headache from the stress that Den Defence has caused me. I'm sorry, but you do not interrupt free running and sword fighting for pointing and clicking. Ever. That is like interrupting a boxing match for a game of chess. Had Den Defence been good, it may have served as a nice mini game. As it stands it is a huge, smelly turd left in the cubicle by the previous occupier.

Sound wise Assassin's Creed is very much the same as its predecessors. Nolan North is back and completely wasted on the dry and boring Desmond Miles. Roger Craig Smith once again fills out Ezio with a solid performance, conveying a man who is less cocky and arrogant than before. It is great that Smith doesn't just give us the same Ezio again, but gives us a character who is clearly feeling that he is too old for this shit. He is still confident and bad ass but, there is a sense that he is also tired and ready to let the next generation take over. Elsewhere the sound is as you expect, the sound effects are mostly recycled as is the general sound design. There is nothing remarkable going on here, but it all works as well as ever. Alongside the robust single player content is a solid multiplayer offering, bringing back the multiplayer format from Brotherhood and adding some extra modes. It is an odd single player format, success being partial down to your ability to act like an AI bot. The multiplayer is significantly better than in Brotherhood however, even including some story elements as you progress through the levels. Some of the character designs are awesome and the manic chases and conflicts are more heart pumping when the person chasing you is actually a real person who has some skills.

This is where I seem to contradict my previous negativity. Revelations is probably the second best Assassin's Creed so far, after ACII. The story ties together the first two games nicely by following both protagonists last days. I think my appreciation for this game would be much higher had Brotherhood never been born. The awkward middle child takes the shine off this superior sequel by being so similar to the games that sandwich it. If things like online multiplayer, assassin recruiting and the added gadgets were all new to Revelations there would be so much more weight to its existence. The last days of a legend story is a familiar one but it is a fitting end to our relationships with Ezio and Altaïr. This hopefully paves the way for a new ancestor for Desmond to step into or maybe even a futuristic adventure (though how they could excuse all the ledges and hand holds I don't know). But whatever comes from the Assassin's Creed franchise I hope it is a new, proper game that receives all the effort and attention that ACII had.

Assassin's Creed: Revelations is out now on Xbox 360, PS3 and will be released on PC on the 29th of December.

8 Best Video Games Made Entirely By One Person

Football Manager 2022: 10 Signings You Must Make Every Time

10 Most Beautiful Open World Video Games You Must Play