Way back in 2009 Gearbox Software released Borderlands: a frantic, cell-shaded shooter with a heavy emphasis on co-op play. It also had millions of guns. Needless to say, the game proved immensely popular, and ended up being one of the most memorable and entertaining games of the year. After four instalments of DLC, Gearbox aimed their sights higher, and began working on a sequel. Enter Borderlands 2 - set several years after the events of the first game, Borderlands 2 returns to the world of Pandora, which is now viciously oppressed by the Hyperion Corporation and their crazed leader, Handsome Jack. Stepping into the shoes of one of four new vault hunters, players are tasked with overthrowing Jack, saving the planet, and unearthing whatever treasure lies in a newly discovered vault. Youll also end up killing thousands of hostile people, creatures and robots along the way. One of the biggest criticisms levelled at the original Borderlands was that the plot was fairly weak, merely serving as some half-assed way of providing context to your actions as you wandered around, blowing shit up. With this criticism in mind, Gearbox have obviously worked hard on the narrative of Borderlands 2. Whilst the plot may not have anything on Dickens, it does represent a vast improvement on the original. Now journeys across the wasteland actually feel purposeful, rather than just giving you an excuse to blow up more bandits. Handsome Jack is a well-crafted antagonist, being both hilarious and tyrannical, with plenty of madness thrown in for good measure. Over the course of the lengthy main story you will come to detest this corporate tyrant, and really get involved in the quest to end his reign over Pandora. Without giving too much away about the story, its fair to say that there are plenty of unexpected twists and turns, some of which have real emotional gravity. It is also brilliant to see the four original vault hunters return, all of them with quite significant roles. Having spent many hours playing with (and as) them in the first game, its good to see their roles continuing in the sequel. If a massive main storyline wasnt enough, there are more side quests than you can shake a skag at. These vary from the typical go here, fetch this type missions, to timed quests and bigger multi-part affairs with their own (often hilarious) storylines. With the main quest becoming quite serious at times, Gearbox really poured all of the wacky, crude humour into the side missions, making every one a delight to complete. Again, numerous characters from the first game reappear as quest givers, which is really rewarding for players who invested so much time in the original. The voice acting is superb throughout, and really adds to the games humour  its rare to actually laugh out loud whilst playing a game, but Borderlands 2 accomplishes this on a regular basis. Aside from this, some of the best moments come in the form of nods to other bits of gaming and pop culture, ranging from Batman to Minecraft to Snow White. Little details like these show that real work has gone into creating the game world, with numerous secrets and easter eggs lurking in every region. 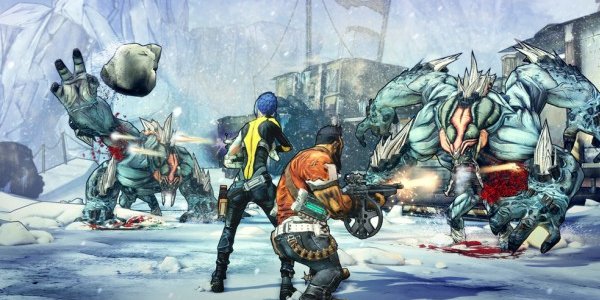 Gameplay wise not much has changed from the first Borderlands, which isnt necessarily a bad thing. The central premise still revolves around the concept of kill enemies, loot their stuff, kill more enemies, level up, get better loot, continue ad infinitum. Its an addictive formula, and the dream of opening the next box and finding an even more awesome weapon can lead to many misspent hours. The introduction of four new characters means four new skill trees to get to grips with, and each vault hunter offers vastly different options in terms of playstyle; Zero works as an assassin, but can be developed to excel either at long or close range, using his cloaking ability to move unnoticed through the battlefield; Salvador isnt so subtle, instead preferring to hold a gun in each hand and gunzerk until the battlefield is covered in red stains. With multiple ways of levelling up each character there is lots of room for customisation and finding the ideal build for your playstyle. As well as the traditional levelling up, players also earn badass points for completing challenges  these points can be used the buff stats for all your characters. One small complaint is that, in single player at least, certain characters will have a tougher time than others; good luck trying to single-handedly take out most bosses with your sniper. However, since the whole point of Borderlands is to get some co-op madness occurring, this shouldnt be a problem for anyone with friends. The co-op play is where Borderlands 2 really shines, just like its predecessor. Whilst the single-player experience is still awesome, everything is just better with more people; more players means more enemies which means bigger firefights which, ultimately, means better loot. Its also nice having someone around who can come over and revive you when you get capped by a raging midget. The only time co-op can get a bit annoying is when the rest of your team grab all the best loot for themselves, leaving you with just a pea shooter and a feeling of immense betrayal. Whilst you can have up to four player co-op online, youre limited to only playing with two people if you stay local; it just doesnt seem to make sense that a game that is designed for four players wont let them all play on the same console in the same room. Borderlands 2 has retained the cell-shaded look and, as a result, is one of the most distinctive looking games out there. Every area has a distinctive look, with locales ranging from glacial mountain tops to futuristic cities to lush (but deadly) countryside. Many of the areas are huge, leaving plenty to explore even after the mound of quests has expired. A fast travel system and vehicles make traversing such massive areas simple and speedy. Aside from a bit of texture pop-in, everything looks stunning, especially combat, where the mix of explosions, blood and floating stats creates an atmosphere of complete carnage. All of the enemies are distinctive and, whilst many old favourites return, there are also plenty of new things to shoot, which gives combat some nice variety. Everything else, from the music to the menu system, is executed brilliantly, with every element complimenting the games cartoony, exciting aesthetic. With a massive main storyline, countless side-quests, four playable characters and a new game + mode, Borderlands 2 offers and incredible amount to players. Great as a single player experience, but fantastic when played co-operatively, Borderlands 2 represents what games should be about; pure, unadulterated fun. It doesnt care about photo-realistic graphics or gameplay that obeys the rules of nature (you take no damage from falling, and never grow tired whilst sprinting). Everything about Borderlands 2 shows that it is a game that has been built to be enjoyed, to entertain, and to give players a good time. The fact that it manages to do this whilst also delivering a meaningful plot is a testament to Gearboxs hard work. Putting both feet forward, Borderlands 2 is definitely bigger, better and more badass-er. Borderlands 2 is available to buy now.
Want to write about Borderlands 2 and Reviews? Get started below...
Contributor
Alex Hawksworth-Brookes
Contributor
Twitter

10 Video Game Developers Who HATE Their Own Creation

10 Awesome Video Games That Fail In The 3rd Act