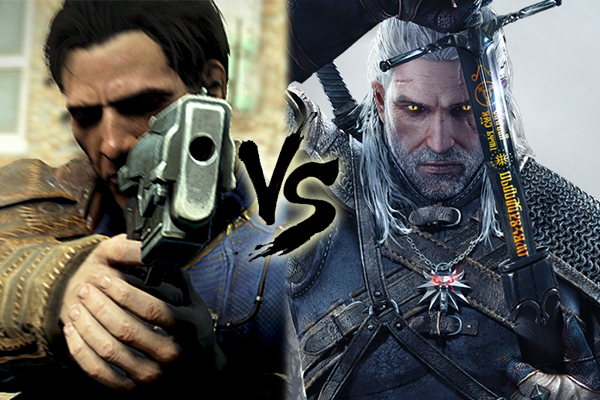 On the face of things, Fallout 4 and The Witcher 3 couldn't be any more different. Guns and super mutants vs swords, sorcery and griffins, towns patched together from corrugated metal vs medieval villages, abandoned vaults vs dungeons - and yet any gamer will passionately tell you that this is the most important video game showdown of 2015. That's because beneath the contrasting facades, both games sit pretty at the peak of the RPG genre. Neither does anything particularly unconventional, instead both of them offer beautiful, believable open worlds that players can get lost in for months. Mechanically, RPGs have certain defining traits such as intricate character-levelling, dialogue choices, and a degree of freedom in how the player can approach quests and objectives. But the most important thing is that its constituent parts fuse together to form an experience that the player wants to get immersed in. Fallout 4 and The Witcher 3 both meet the criteria for RPG greatness with flying colours, but only one can be crowned king in this comparison. Read on to find out which of these two is the best RPG of this generation so far. Note: There are no spoilers in this article.

It seems ironic that in this pair of world-class RPGs, the main questlines just don't feel that significant, and aren't in themselves huge selling points for their respective games. RPGs are as guilty as any genre of tending towards cliches and tropes, but The Witcher 3 does its very best to steer clear of them. Rather than starting off as a typical world-saving story, it's essentially about Geralt's search for his surrogate daughter, Ciri, who is being hunted by a group of warriors known as 'The Wild Hunt'. Try though it might, the story does eventually funnel into the usual 'save the world' type fare. On the bright side, there are 40 different permutations to the ending, which help your choices throughout feel weighty and significant. There is also plenty of romance, intrigue and formidable characters along the way, making the main quest an enjoyable ride that's easy to get invested in. Fallout 4 follows the classic series formula of spewing the player from a vault and out into the irradiated world. This time, your motivator is finding your missing child and avenging your murdered wife, which is, erm, original... The main questline is undermined somewhat by the mundanity of the game's protagonist and largely forgettable characters, but at least it's supplemented by the parallel story of siding with one of several factions vying for control of the wasteland, and shaping the political future of the Commonwealth. While neither story is incredibly original, The Witcher 3 ultimately tells its one better. It feels deep and involving, and you care about the characters involved. Its vast number of end-states also nods towards that all-important RPG notion that every decision counts - not just towards which end cutscene you get, but also towards the fates of the characters you meet along the way.
Contributor
Robert Zak
Contributor
Twitter

Gamer, Researcher of strange things. I'm a writer-editor hybrid whose writings on video games, technology and movies can be found across the internet. I've even ventured into the realm of current affairs on occasion but, unable to face reality, have retreated into expatiating on things on screens instead.

10 Video Game Openings That Pissed Everyone Off

10 Gaming Moments Everyone Wishes They Could Unsee

10 More Video Games Where You Die At The End New