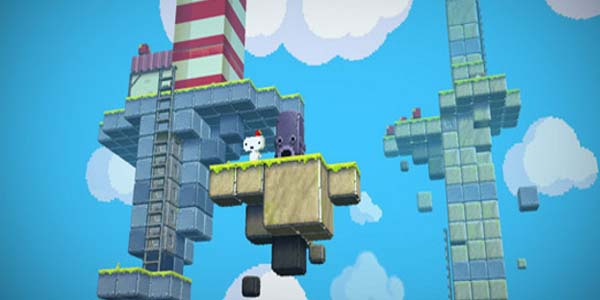 Polytron have released an extended gameplay trailer for Fez, the perspective-shifting puzzle platformer by indie dev overlord Phil Fish. The 6-and-a-half minute video below comes at the end of a string of teasers, trailers and video screenshots to be released by the studio during the game's four-year development period, but is the first official footage to actually demo the game's mechanics and character controls. http://vimeo.com/38466193 The video features extended gameplay footage from the Fez trial version, and demos the character's basic abilities  jump, climb vines and ladders, swim, push switches, move crates  as well as sketching in the player goals and achievements. You collect golden cubes from chests or by finding them dotted around the levels, and after collecting a certain number of cubes can use them to open doors leading on to other parts of the game. You also seem to have your own companion / adviser in the form of a talking cubic zirconia. The buzz around Fez has mostly centred around the player's ability to switch perspective to get to previously out-of-reach areas, which you control using the trigger buttons. I've been curious to see how this mechanic would be applied in a way that wouldn't ape other 2D/3D platformers like Super Paper Mario or Ilomilo, but it seems that I needn't have worried  the in-game footage demonstrates the perspective shifts to be breathtakingly elegant in their implementation, with the entire level rotating round a central axis at the touch of a trigger. After seeing the game in action, those years of labour are really starting to make sense. Fez was due to be released in the first quarter of this year for XBLA, but has yet to receive an official release date.

10 Most Underrated N64 Games Ever

10 Video Games That Let You Be TOO Powerful