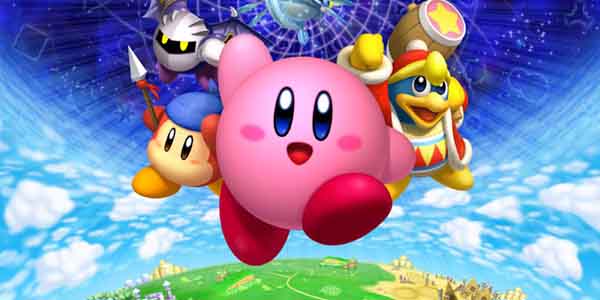 First things first: Kirby's Adventure Wii is a ridiculously cute game. Even by Nintendo standards the characters, gameplay and level design are utterly adorable, to the point where I spent the first five minutes of the game mucking about in the training level trying out Kirby's moves for the sheer joy of watching the charming character animations. This is something to bear in mind while reading the following review, as if you're not particularly a fan of the Wii's staple catalogue of cuddly candy-coloured platformers this game *may* not be for you. However, the beauty of Kirby's Adventure comes from the fact that - unlike many similar games for that platform - beneath the cuteness there is also a genuinely addictive and fun game to be played. A traditional 2-D platformer in the manner of classic Nintendo games, Kirby's Adventure unfolds through the traditional structure of playing through a handful of worlds each featuring a number of sub-stages and a boss level. The framing narrative consists of an encounter with a friendly alien spacecraft who crashlands on Kirby's home planet: completing each of the worlds returns a missing part from the damaged alien ship that will allow it to return home. We can largely ignore the backstory though, as  like all good platformers  the pleasures to be had from the game are derived from imaginative gameplay and level design that keep the largely formulaic structure of the game from becoming dull and repetitive. The key feature of the Kirby franchise is the character's ability to inhale enemies and take on their abilities, and this element has been re-introduced after the decision to opt out of it in last year's KIRBY'S EPIN YARN. Kirby has a seemingly endless variety of abilities at his disposal, and refreshingly the most powerful and entertaining of these are dotted throughout the game, instead of being clustered around the more challenging levels. In general, there's far less focus on creating stages that get exponentially more difficult throughout the game, and more interest in crafting an entertaining playing experience throughout. Many of the levels feature what could be particularly arduous segments filled with enemies and environmental hazards, but leave you a conveniently placed power-up item to allow you to muscle your way through it. There's something immensely fun about creating a trail of destruction with a tiny pink puffball wielding a giant scimitar sword, and I was pleasantly surprised at the obvious glee the otherwise innocent-looking game takes in encouraging you to create absolute havoc.

The stages themselves contain enough variety to remain enjoyable even as the structure begins to become predictable. There are numerous secret areas and bonus challenges within the main game, as well as mini boss battles that occur every couple of levels. The worlds are themed by location, featuring amongst others an underwater Mario-influenced world and an icy Crash Bandicoot-style world. The game is peppered with a steady supply of in-jokes and references to other Nintendo series: there are Boos, guppies, Bullet Bill-style cannons and those really annoying eels that keep blocking your way in underwater levels, as well as a fair few Donkey Kong homages (including some great uses of rotating barrel launchers). Collectables exist in the form of energy spheres, though unfortunately the game conforms to the disappointing tradition of making it extremely frustrating to try and collect all 120, which is irritating as they unlock the marvellous mini games and extra challenges outside of the main game itself. The mini games make great use of the Wii controller, giving you an opportunity to turn the controller upright to chuck throwing stars at targets and shoot at giant robots, while the challenge levels are fiendishly addictive and devilishly hard to achieve a top score on (which didn't stop me trying). If I have a major gripe with the game, it's that without his abilities Kirby himself is relatively powerless. This wouldn't be a problem if it wasn't so easy to lose your currently assigned ability while taking damage during a boss battle, but extra lives are hard to come by and it was frustrating to keep being left empty-handed during a major boss fight after taking a couple of hits. In all, this is a minor complaint about a game that succeeds in crafting an immensely enjoyable platformer dotted with pleasant surprises and some moments of freshness and originality, even if it largely doesn't stray beyond the traditional boundaries of the genre.

10 Most INFURIATING Legend Of Zelda Dungeons

10 Most Unique Ways You Can Be Killed In Video Games

How Well Do You Remember The Gears Of War Series?