With the Circle Pad Pro's added triggers you get an elegant and streamlined control system that makes the game a total joy to play. The pressure sensitive commands from the Playstation scheme have been replaced by a pop-up option system where you use the D pad to chose to either interrogate, stun or kill your captured foe. You use the touch screen for all the menu and hud information which leaves the top screen uncluttered. You also get three options for shooting; auto aim (which is great for boss fights), first person mode (great for stealth) and a third person cross-hair lifted from MGS4 and Peacewalker. These are easily cycled and offer more variety that ever before. Graphically it isn't HD but it certainly looks sharper than the PS2 version. It is perfectly optimised for the 3DS screen and really looks great. The cut scenes are especially fun in 3D as Kojima is one for wild angles and perspective shots. The only time the small screen and non-HD graphics will frustrate is when spotting enemies, as they really blend into the background. This was always an intentional part of the game but the smaller screen makes it rather more challenging. Still, the frame rate keeps up and the over all presentation is slick. 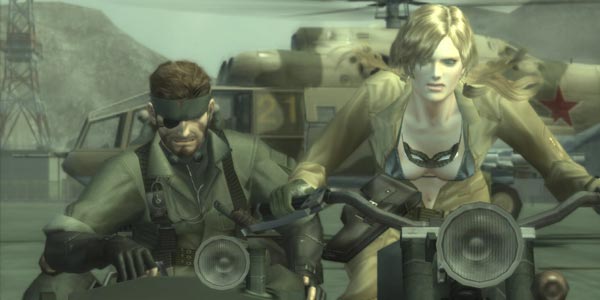 If you are new to the franchise, where the hell have you been? MGS3 works well as a stand alone game and always did due to it being a prequel to the franchise. Naked Snake is a great replacement for Solid Snake (you'll barely notice the difference) and he comes across as a proper bad ass with his CQC chop socky tearing down everyone but The Boss herself. At times the story veers towards melodrama and the 2D stock footage scenes can drag but on the whole the story is entertaining. Just, don't be afraid of some really camp bosses. Metal Gear Solid: Snake Eater 3D is out now on the 3DS.

8 Video Game Plot Twists That Were Hiding In Plain Sight

10 Video Games That Have Been Ported To Everything