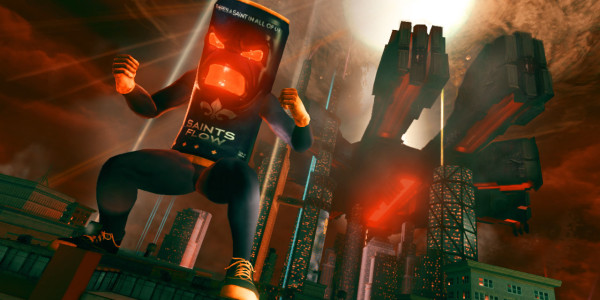 As the title suggests Enter The Dominatrix does take some cues from The Matrix (The title itself closely resembles the old Enter The Matrix game on PS2 - remember that?). Like in the famous Keanu Reeves movie you play inside a virtual world after being plugged into familiar looking pods. Strangely the story is linked by the characters talking about the events in retrospect, and mocking some of its intentionally lame plot. This allows the plot to keep moving and you can quickly garner some of the nifty super powers which will help you feel more like Neo and which are a blast to play around with. Freezing enemies, and smashing them like the T1000, and leaping and gliding around like Superman should be a feature in every game. The Dominatrix of the title is the main boss you must overcome in this DLC, and whilst a acceptable enough is hardly an original idea for a Matrix parody. Not that I'd know of course, but you can bet that a Matrix parody based on a dominatrix has been floating around probably since before the original movie hit cinemas. If you're a huge Saints Row fan you'll certainly have fun with this, although don't expect this to be groundbreaking (which to be honest isn't something any gamer should expect from DLC). It should give you a couple of hours of new content if you choose to savoir it rather than inhale it, and is certainly worthy of the odd replay. The good news is that like the original release of Saints Row IV this is very playable, and the game play is as good as ever. The plot is a bit weak, but this intentional and shouldn't put you off playing. Is this DLC essential? No, but it definitely worth it if you couldn't get enough of Saints Row. I give the DLC 4 out of 5
We need more writers about Reviews and Saints Row IV! Get started below...
Contributor
David Pustansky
Contributor
Twitter

Hello! My name is David Pustansky. As well as writing for this site, I'm also an actor, presenter, writer, director and artist. So basically I love creative things where there's a story to be told. I run my own theatre company, The ImProDigies. Be sure to check our shows out. As I'm sure you'll see from my articles I often look into things with a unique and quirky perspective and have a strange attention to sometimes strange details. Enjoy!

Ranking Every Battlefield From Worst To Best

Nintendo's Next Console: 10 Ways To Blow Switch Out The Water

10 Video Games That Were MASSIVE Jokes

10 Most Hated Resident Evil Enemies Of All Time

Halo Infinite: 10 Ways To Save The Franchise