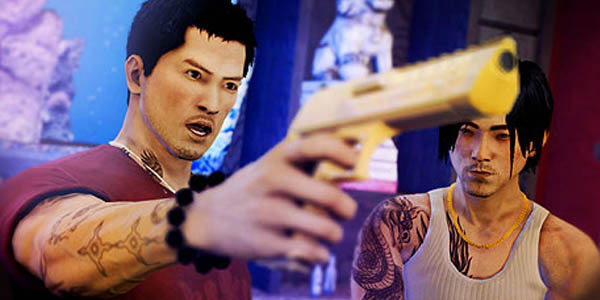 If mimicking is the greatest form of compliment, then Sleeping Dogs is paying a lot of respect to Grand Theft Auto. There's no beating around the bush here, so it may as well be got out of the way early: Sleeping Dogs is very similar to Grand Theft Auto, in style, attitude and presentation. The driving is barely different, the cut-scenes use similar camera shots and the gun-play similarly dire. Yet, this is no bad thing; it would be stranger if Sleeping Dogs bore no resemblance to the daddy of crime sandbox games. It is to the credit of United Front Games then that Sleeping Dogs still feels as vibrant and fresh as it does. Slickly produced and with a lot of attitude, Sleeping Dogs is a fantastic and fun game that, whilst more of a jack of all trades rather than a master, is still an invigorating and brutal experience. Formerly under the moniker True Crime: Hong Kong, Sleeping Dogs sees the player take control of Wei Shen, a police officer attempting to gain entry to the Sun On Yee Triad gang, and then take them down from the inside. The plot is definitely one of the stronger points of the game and keeps the game anchored down to a central point. In-fact, it is so absorbing and bloody, despite not exactly throwing many surprises your way, that one resists the temptation to muck around or cause havoc in the city to instead focus on the story. This attempt to place the protagonist on the 'right' side of the law (but where do his allegiances truly lie?) has marked effects on the game-play as well as the story. Whereas in GTA, for example, as a criminal you have no obligation to society and can thus do whatever you wish, the implication in Sleeping Dogs is that you will always have someone to answer to, whether they be the shady upper echelons of the Triad or the HKPD who you are undercover for. As such, you cannot simply dash around smashing, grabbing, beating and killing. Sure, you can, but your police XP will take a beating, halting the development of Wei. XP is an attempt by the developers to give Sleeping Dogs some RPG-style character progression, and for the most part it works very well. Wei earns XP in two strands  the police and Triad  and thus earns points for the Triads through violent actions (environmental deaths, for example) but loses police points for reckless actions (hitting bystanders, damaging property, running into walls (?!)). Although this system has been well developed, and keeps in mind the Triad-Police tensions Wei has to tip-toe, some of the bonuses are bemusing. As a reward for good police work, you receive a slim jim, making it easier to steal cars; surely inconsistent with the fact, you know, you're being rewarded for following the law. Despite the strong story-line and narrative capabilities of Sleeping Dogs, the emphasis is definitely on having outrageously good fun. There is little social commentary here; everything, in particular the characters, is larger than life to the point of caricature. Strangely, the grittiest part of the game is the combat, which takes a hefty dose of inspiration from Batman: Arkham Asylum and its rhythm based fighting. The fist-fights are fast and fierce, but don't seem as well formed as they ought to be; hits aren't as heavy as they should be, and the counter system is erratic bordering on frustrating.

The emphasis here is on brutality and shock; there appears to have been an early attempt to produce a psychological effect on your opponents, scaring them and making them shudder to gain an advantage, but this has been replaced by over-the-top environment kills. These involve finishing your opponent using, surprisingly, objects around you; anything from fish-tanks to generators, roofs to speakers can be utilised for mutilation. Again, like much of the game, the fighting is very good but not perfect, unlike the shooting mechanics, which are surprisingly poor. This doesn't really matter though, as there are few guns in Hong Kong, as slyly mentioned in the narrative. Hong Kong is a big city, and there is plenty to do in the grimy metropolis. Aside from the main quests, split between Triad jobs and Police work, you can bust gangs, sing karaoke, woo girlfriends, steal cars, hack cameras, buy clothes, street race, design t-shirts and more options for the restless soul. There are further side-quests, but most involve being duped into doing something before being robbed, at which point you chase the assailant before fighting them. Although many of these activities become repetitive, they do have a purpose. By completing such tasks you gain face, and the more face you have the more people respect you, the better clothes you can wear, cars you can drive etc. Like much of Sleeping Dogs this aspect of the game has been well-judged to encourage further interaction with the game-world, rather than just following the quest line. Graphically, and in atmosphere, the game is a bit hit-and-miss. At times, Sleeping Dogs and its environment look stunning; roadsides glow, people bustle, traders shout, everything seems as it should. Next moment, the city seems an empty shell, devoid of life, removed to suit this mission or that, whilst graphical glitches and harsh textures become apparent, no more so in the gaunt, gangly and terrifyingly plastic character models. The faces on these character models are even worse, barely moving or reacting whether in the throngs of joy or recoiling at another messy death. For a sandbox game, the engine is relatively solid; the glitches were mostly superficial and did not effect the actual game-play thankfully. The soundtrack, however, is awesome, with a full roster of licensed tracks to accompany your ride. Sleeping Dogs is a jack of all trades, master of a few. It is great fun to play, with an invigorating story, strong cast, gripping gameplay (especially the free-running) and a well-developed RPG style system. Combat, although fast and brutal, lacks the solidity and impact it ought to have, many of the side-quests become repetitive and the city doesn't feel quite as alive as it should do. This, however, is perhaps nit-picking, because I cannot deny despite these faults how much I have enjoyed playing Sleeping Dogs and how much I continue to enjoy playing it despite the end of the main quest. The Triad-Police tensions tug you one way and the other, impacting the game-play subtly but noticeably, whilst the backing cast all add something to the experience. Either way, despite the faults, Sleeping Dogs is a worthy purchase and up there with the games of the year; although don't be surprised if the buzz dies down when the rest of the competition catches up.

A renaissance man and consumate liar, Joseph pretends that he is interested in many things, ranging from vinyl records and fine books to ancient history and whisky. Really, all he wants to do is sit around playing games or watching football before letting everybody know what he thinks about them. You, dear WhatCulterer, are the latest victim; to find others, follow him on Twitter @JosephTrotterV2.

10 Things We Want To See From The AEW Video Game