Bastion is special. Of course through being so, Bastion makes it quite awkward to discuss without spoiling any of it's magic. Indeed, it is difficult to describe the potency of this experience without tainting expectation of it's fantastic gameplay or spoiling any of it's narrative or artistic nuances, those subtle brush strokes which makes it such a worthy experience. The only real problem Bastion faces is audience expectation. Some amongst the gaming community are ready to dismiss arcade titles outright, considering them to be 'too indy' - too indulgent, overly arty and ultimately lacking in any meaty gameplay or serious longevity. Here, Bastion is definitely the victim of its own success.

At a glance, this lovingly crafted tale of a boy on a fantastic journey seems to fit right within those predefined indy trappings (see: Limbo). Couple this then with the gorgeous painted art style, incredible musical score and mellifluous warbling's of the narrator (more on him later), you could be forgiven for thinking that Bastion is just that: some mumble in the wind art title that doesn't really engage you in any meaningful gameplay sense. Jumping to this conclusion however, would be a fatal error. Yes, Bastion is beautiful but it is also challenging and exceptionally engaging. Without the masterful story and breath-taking production value Bastion would still be an incredible action RPG in and of it's own right. Indeed, one of the games main draws is the perfectly pitched action. Bastion manages combat that feels kinetic and weighty, whilst also giving it that customisable role playing element under the hood. When progressing through the game one finds new weapons that may be upgraded and customised to tailor the experience. Rather than an infinity of loot however, there 11 weapons given to the player at key moments in the story and 11 weapons only. Each handles differently, having it's own set of gameplay parameters for effective use in each combat scenario and has a limited number of upgrade slots. When upgrading a weapon the player makes a choice of two options per level, such as 'more ammo per clip' or 'a faster reload time'. As such each weapon becomes tailored and can be re-customised as many times as you like between levels to finesse it's gameplay outcome. Considering then that no single fully upgraded weapon really dominates the other, the joy comes in switching between upgrade slots and weapon combinations to think your way through the challenges you face. All the while levelling up, customising your experience and finding the load out that suits you.

Though that said, Bastion won't ever punish you for just sticking with what you know. The game introduces weapons to the player, giving you opportunities to try different combinations at no cost to your overall experience, level or enjoyment. But similarly, if you like the starting weapons you wont be frowned upon if you stick with them The game is not just good at giving you choices in the literal what will you hack, slash and shoot your enemies with? sense, it also has a fantastic difficulty system. Rather than asking you for an arbitrary challenge rating before the game starts i.e. would you like easy, medium or hard; you simply start playing the game. After a while however, once the game has eased in it's story and gameplay, it introduces the temple. The temple is the system whereby one may use idols to invoke the gaze of certain deities. Each God will increase the gameplay challenge for the player, whether it be faster moving enemies or enemies that spawn grenades when they die (in a very literal translation of Call of Duty's 'Martyrdom' perk). On their own these challenges are manageable but when many gods are invoked the difficulty scales accordingly. The reward for making it through levels with greater difficulty is more xp and currency. As a result of this you can tailor the experience to you, taking on bigger risks for bigger rewards and giving the game tremendous replay value.

Back on the story and art side, without wanting to give anything away, the whole thing is a treat. Upon completion you may well want to start a new-game-plus simply to see it all again. Not to mention the alternative ending you won't have seen or the opportunity for more upgrades, potions etc. this brings. The narrative itself has enough twists and turns to keep it genuinely engaging and the fiction manages to create a world that, when it's over you'll feel you have a good understanding of, but that could potentially have much more up it's sleeve. The star of the show however is the narrator. He's the conduit through which the fiction is brought to life; the reason the monsters and dungeons transcend the banal; the reason you care about the kid and his journey and the thing that ties the whole experience together. Praise enough cannot be given for the writing and performance of this character, the execution is nothing short of superb. The narrator get's inside the player's head and gives this game it's soul. Though, it's important to note that not only does the narrator give context to the potions, dungeons, monsters and narrative of Bastion he also directly responds to the player's actions. He will directly reflect on your performance, your weapon choices  indeed if the story itself wasn't fantastic (which it is), this feature alone would help Bastion stand above the rest. Indeed, so much is the narrator a brilliant story telling tool he manages to make the arbitrary challenges of that standard 'increasingly difficult waves of enemies' scenario actually engaging. Not only that, the brilliant writing means that the narrator is actually able to justify these segments of the game narratively. In short, Bastion's story is not only good on paper, it's presented in a way that stops you being a person pushing plastic buttons on a sofa and starts making you feel like a player in a unique story that unfolds before you.

Bastion achieves the video game holy grail and manages to intertwine story and gameplay seamlessly. In fact the whole experience is so lovingly crafted it is difficult to find fault there within. Next time around one hopes Bastion's success allows for more great story, more twists, maybe some co op but really just more of the same would be enough for many. If you don't like Bastion it will be for a specific reason, such as the narrator or the fiction, but if you don't mind a game that tries to tell a story Bastion has a lot to offer. 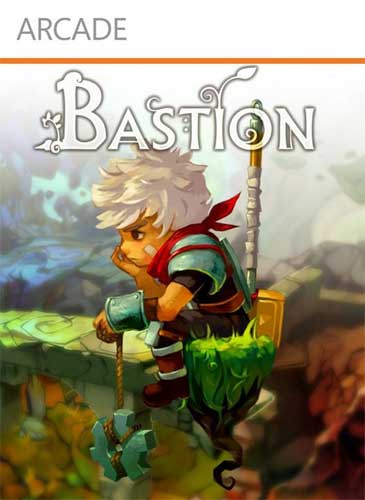 Jim is a writer from south London. @Jim12C

The Best 2021 Video Game NOBODY Played

10 Upcoming Video Games We NEED To Know More About