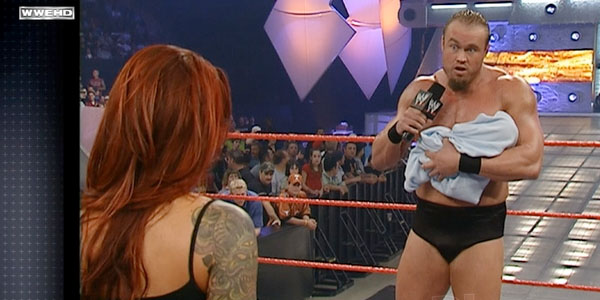 Snitsky probably has the weirdest debut angle of all-time and it actually turned him into a weirdly hot heel for awhile before the power of WWE Creative buried him for good. In September 2004, Kane was a full-fledged heel but was managed by the babyface Lita. You see, Kane was beating up Lita's boyfriend Matt Hardy too much so Lita slept with Kane to bribe him into leaving Hardy alone. Kane then won Lita's managerial services in a match and set about preparing for his offspring to be born. Yes, I realize this whole thing is as stupid as it seemed in 2004 .Anyways, Kane was scheduled to face the debuting Snitsky in a no-disqualification match on Raw. Since no one had heard of Snitsky before, it was figured to be another Kane squash match. However, things took a turn when Snitsky hit Kane with a chair, causing him to fall on top of Lita and cause her to miscarry Kane's baby. This was supposed to be just a one-night appearance but the angle inexplicably got Snitsky over so much that he was kept on the main roster. Unfortunately, since the creative team had absolutely no ideas for him outside of one night, Snitsky was immediately lost in the shuffle and exposed as someone who didn't have nearly as much ring experience as was necessary. He was given a foot fetish gimmick that surprisingly failed to sell out arenas all over the country and was eventually moved to the Sunday Night Heat program. https://www.youtube.com/watch?v=AmsIf5aYkDM He drifted from aimless angle to aimless angle for the rest of his WWE career before being granted his release in late 2008. Recently, Snitsky appeared in TNA, attacking Bully Ray, but I wouldn't hold my breath for better booking on Impact Wrestling.
Contributor
Mike Shannon
Contributor
Twitter

WWE Wrestler Says He Had "Residual Heat" After Returning