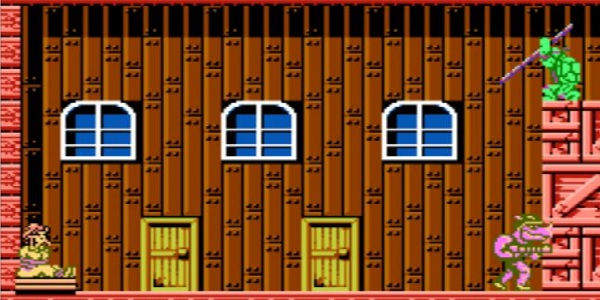 Nothing is scarier than being low on health after a difficult level only to have a big, scary boss come barreling straight at you. You panic, and in your fear take shelter. When Rocksteady ambushes you in Konamis Teenage Mutant Ninja Turtles, you jump to the only safe place you can  atop the stack of crates on the right side of the screen. Thats when you make the discovery. From here, Rocksteady cant hit you, but you can pummel him. As long as you have Donatello and his long-range Bo, you can crouch atop the stack of crates and stab at Rocksteady from a safe distance. Not every blow will land, but if you time it right so that you strike while Rocksteady is in his charging pose, the battle is effortless. Some people may not consider this a cheat, but it seems unlikely the designers intended the fight to play out this way. There are lots of spots throughout video game history that seem threatening when you first approach them. Usually by trial and error, you discover a safe spot. Whooping on Rocksteady with Donatellos Bo is a famous example of this, but there are countless others. Sometimes it isnt a matter of finding a safe spot but of tricking an enemy into repeating an easily conquered pattern. In Mega Man 4, Toad Man will simply hop when you shoot him, allowing you to run under him, turn around, and blast him again. Repeat this and hell never even attack.
Contributor
Kyle Schmidlin
Contributor
Twitter

Kyle Schmidlin is a writer and musician living in Austin, TX. He manages the news blog at thirdrailnews.wordpress.com. Follow him at facebook.com/kyleschmidlin or twitter.com/kyleschmidlin1.

10 Most Unique Ways You Can Be Killed In Video Games

10 Video Games That Wanted The Player To Feel Terrible

9 Most Disappointing Video Games Of The Year (So Far)