With every year comes yet another Call of Duty game, and year upon year, there's an assumption among many gamers - myself included - that the franchise's continual smashing of sales records will eventually grind to a halt. After all, for as much as Activision likes to proclaim that they innovate their immensely popular FPS franchise, there's only so much that can be done under that framework without substantially changing things up, at which point they may well alienate much of their core fanbase. Battlefield 3 proved two years ago to be a worthy opponent in terms of gameplay, though its sales fell rather short of any records, and while it's understandably going to take an absolute behemoth of a game to tackle CoD, these 10 games, either through sales or review scores, just might have what it takes to face the FPS juggernaut head-on... 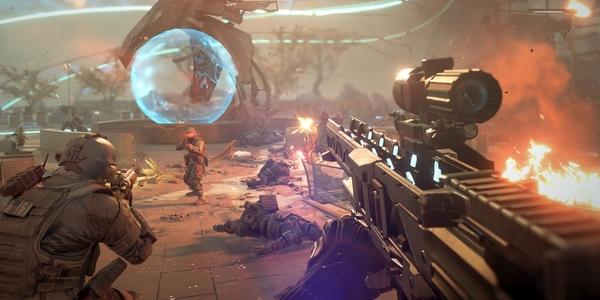 It's fair to say that, though the Killzone franchise has enjoyed steady critical acclaim, it's never matched up to CoD in terms of sales, and given that it's a Sony exclusive, it likely never will. However, as Shadow Fall is being designed exclusively for a next-gen platform, it already has the firm lead in terms of graphics, while what we've seen of the single player campaign certainly seems to be a shake-up compared to both earlier games in the franchise, and CoD itself. The real question mark, however, will be whether the multiplayer offering stands up to muster, for though the KZ games have to date boasted intuitive if not comprehensive online modes, Guerrilla Games will need to substantially raise the bar to contend with the inaugural shooter. Credit to them for attempting something different, then, because Shadow Fall's online will not operate in the now-typical XP-based way, but instead by way of 1,500 challenges which must be completed to progress. It's a brave, enticing shake-up of the formula, and though the addictiveness of CoD's levelling system cannot be denied, maybe it's time that something less-focused on a singular number took precedent.
Contributor
Shaun Munro
Contributor
Twitter

Ghost Of Tsushima: 10 Reasons Why It's A Game Of The Year Contender

Halo: Infinite Delay Is A DISASTER For The Xbox Series X

Everything You NEED To Know About Red Dead Online's Upcoming Properties

10 Video Games That Were Outdated Before They Launched