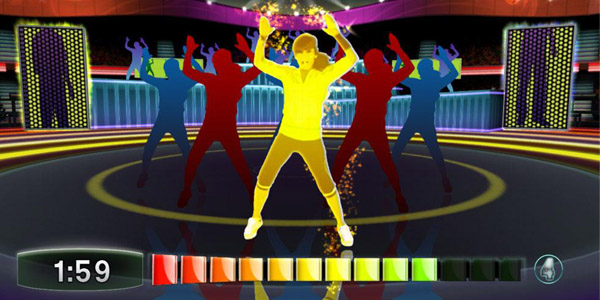 xbox.comWhat a lovely, colourful workout DVD this was! Except that it was supposed to be a game, not a Simon Says workout session. Zumba Fitness was an exceptional showcase of Kinect's palpable disinterest in you and the effort you're putting in. Yes, you're welcome to bounce in time to the horridly festive music, following the on-screen dancers' vigorous routines, but you really shouldn't bother - this game is blissfully unaware of your actions. Just like your favourite gym teacher from school, the one who let the class watch movies in the AV room when it was drizzling, this most forgiving fitness instructor doesn't demand much from the player. Which one would have to consider counterproductive, since this is a fitness game. We're here to get fit, to build up a sweat, to shed a few Big Macs. So it hardly helps that Zumba Fitness is happy to have you waving your arms around willy nilly regardless of what's happening on the screen. That being said, it's probably best that the game doesn't expect too much from the player. The follow-the-leader mechanic here is so weakly implemented that it's close to impossible to mimic the sometimes complex routines consistently. And just then you thought it couldn't get any more loathsome, Zumba Fitness is also the current world leader in dismal gesture-based menu navigation. By the time your workout was about to kick off you would already be aglow with the sweat of pure hatred and frustration. It's worth mentioning that the follow up, Zumba Rush, remedied many of the issues that plagued Zumba Fitness. But that doesn't make it any easier to forgive or forget this painful experience.
Contributor
Henry Dowling
Contributor
Twitter

Game-obsessed since the moment I could twiddle both thumbs independently. Equally enthralled by all the genres of music that your parents warned you about.

10 Video Games That Should Have Started 10 Minutes Later

10 Disturbing Video Game Twists That Came Out Of NOWHERE

10 Ways You're Worse At Video Games Than You Think