In the grand scheme of things, video game developers have stuck to a tried-and-true business model: brand recognition sells. We've seen it all: from masterpieces to down-right dastardly renditions of our favorite heroes (remember Soul Calibur: Legends?). In this short piece I encourage you to digest what titles I think would make excellent spin-offs. 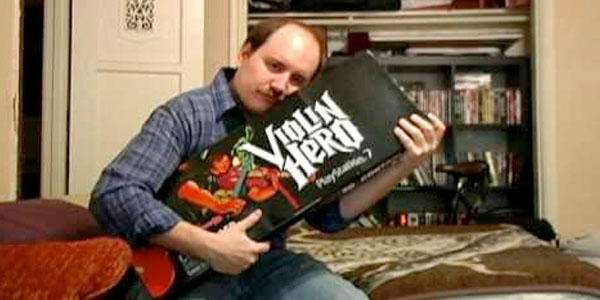 Yes, what if MTV teamed up with Harmonix one last time to create a title based on one of the oldest instruments of our current day? It would be a masterpiece. Imagine a career mode that spanned the length of the instrument's life, detailing key events in its history such as: the use of horse hair for the making of bows and the stringent efforts put forth by violin makers to allow for the instrument to not look so dang uncomfortable to play - oh wait, that hasn't changed at all! What have MTV and Harmonix been thinking all these years? The money wasn't with guitars but, rather, with their smaller, more beautiful sounding older sibling.

Bioware and EA should have capitalized on the unpopularity surrounding the recent Mass Effect 3 release and heard the call of this hidden gem: a title featuring Shepard and his gang, between the events of the 2nd and 3rd installment of course, back and ready for action. Imagine a title that emphasized all the fantastic gameplay which players had come to love from the 1st and 2nd game (minus a few bugs and glitches, of course!) with prettier graphics and a massive budget to ensure that fans got exactly what they asked for. Story-wise, the title would be terribly lacking, however, it would make up for this with a slew of planet-sized mini-games capable of all driving an otherwise amazing title into a fetch-quest for... minerals? Yeah, they did do that already, didn't they? Furthermore, all the publicity surrounding this fervid attempt to cover their tracks would result in a string of sales, ads, movie deals and the like that would make poor Shepard never want to have been rebuilt in light of all the paparazzi at his virtual doorstep. Nonetheless, a title that brought to light all that the original title was known for a second time around would have made fans go wild with wistful anticipation. Click "next" below to read part 2...
Contributor
Antony Wanjala
Contributor
Twitter

Studying Biomedical Engineering and Mathematics at the University of Arkansas. Interested in a career in dentistry, videogame journalism, and music. ~ yes, all three. Check out my blog: antonywanjala.wordpress.com Or shoot me an email at antonywanjala@gmail.com Follow me on Twitter @tsunamiavenger

10 Mortal Kombat Rip-Offs You Won't Believe Got Made

10 Creepy Video Game Secrets That Will Chill Your Blood