After falling into more deadly pitfalls than one might imagine to be possible whilst attempting to market a games console, Microsoft have left themselves in a bit of a pickle with the next generation Xbox One. Now that die-hard Xbox fans have turned their nose up at Microsoft's bumbling efforts to explain why their new console is totally awesome, many have moved over to Sony, who've been busy capitalising on everything that Microsoft has done wrong. Even with all the negativity surrounding the Xbox One, though, there's still a great deal of good about this console and there are plenty of reasons why you should honestly consider Microsoft for your next-gen machine. No, one of them isn't that it's a nostalgic throwback that looks like a VCR. Which it does, of course, but we won't be commenting on that here. Yes, this is going to be a positive article about the Xbox One. Bizarre, I know... 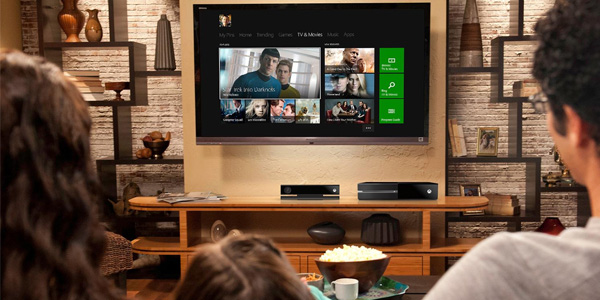 Remember back when the Xbox One was first announced and the whole "TV! TV! TV!" meme took the internet by storm? Yep, that was a disastrous way to introduce a console to next-gen hungry gamers, but the message behind the madness was still pretty clear: Xbox One (which is technically the third Xbox) is named as such because it's meant to serve as the one object in your living room/man cave/gaming retreat that you use to do everything. Capable of playing more media than a media octopus, the Xbox One is designed to integrate TV, gaming, DVDs, Blu-rays, music and whatever else you like into one box that'll sit under your TV. Bored with playing Ryse? No worries, simply chat with a mate via Skype. Sick of talking to a mate via Skype 'cause he's really a bit dull? Switch Skype off and jump instantly back into Ryse. Struggling with playing COD? Jump onto YouTube and watch it side by side to gain pointers as you play. The possibilities for a media-centric unit are vast, and Microsoft, despite their crap efforts, have got a good console here. The problem is that they just communicated it wrong. What they should have said is "we've got this awesome game console here, but it also does all this stuff, too," instead of mentioning gaming in an afterthought.
Contributor
Dan Curtis
Contributor
Twitter

8 Best Video Games Made Entirely By One Person

8 Evil Video Game Choices That Came Back To Haunt You

10 Rarest & Most Valuable Nintendo Switch Games You Might Own