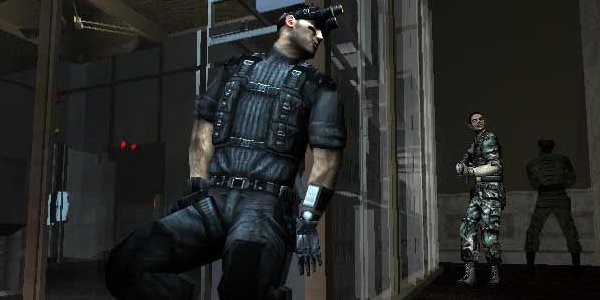 Whether youre scaling cliffs to Uncharteds booming orchestra, or gunning down goons to the pounding beat of Battlefield 3, great music makes games better. Wandering the halls of the RPD building wouldnt be the same without the eerie tones of Masami Ueda to keep you company: who can imagine Marios playful jumping without the trademark der-der-der-der-der-DA-der? Whether its aimless sandbox meandering youre after, or explosive full-speed action, superb soundtracks can set the mood faster than a candle in a wine bottle. Here are five of the best:

Composer and DJ Amon Tobin faced a tough challenge with the Chaos Theory soundtrack. Splinter Cell changes pace at a moments notice: one minute youre tiptoeing your way along a darkened catwalk, the next, a guard has you in his flashlight and all bullet-flying hell is breaking loose. As such, Tobin broke his records into four distinctive parts, with each one moving from a steady, rhythmic ambient section to a pulsing action beat. The range of Tobins soundtrack was tailored to fit Splinter Cells ever-changing gameplay; each mission has its own signature track, mixed on-the-fly to suit whatevers on-screen. Take a listen to the track El Cargo and you can hear it move from low-key drum and bass to pounding action-rock. http://www.youtube.com/watch?v=9SzhjG6OkvI Having the music change and blend organically creates a dynamic and sensory play experience, with you constantly having to listen out for any change in tempo that might indicate a suspicious guard - Red Dead Redemption, Portal 2 and Assassins Creed have all picked up on Tobins ideas since, using the gameplay as a kind of shuffle function. It makes for a wonderfully eclectic soundtrack album.
Contributor
Edward Smith
Contributor
Twitter

Manual laborer and games journalist who writes for The Escapist, Gamasutra and others. Lives in London. Last seen stumbling around Twitter muttering to himself @mostsincerelyed

5 Video Games That Escaped Development Hell (And Turned Out Terrible)

10 Intense Video Game Achievements Worth NOTHING

How Well Do You Remember Star Wars Jedi: Fallen Order?

10 Times Video Games Made You Betray Your Friends

Skyrim: Killing These NPCs Breaks EVERYTHING